Through this guest blog series, my intent is to share some of my experiences implementing supplier quality and Lean manufacturing initiatives by focusing on eKanban systems. My first post offered advice for planning an eKanban rollout (advice that could be applied across any Lean manufacturing project). In this installment, I’d like to talk about strategies for rolling out an eKanban project that have proven successful for me.

Whether you use Google maps, Apple, MapQuest or some other breed of navigation, you know you must enter both a starting location (or allow the system to “know” your current location) – and a desired destination. Too often, I see manufacturers get excited about the destination of best-practice process improvement without carefully considering the starting point. 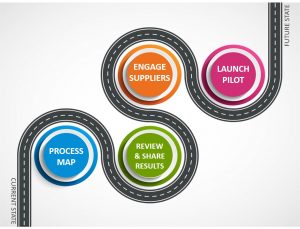 The Value in Value-Stream Mapping

In my view, the process starts by gaining a clear understanding of the current, “as is” state, because you can’t make process improvements unless you can explain the problem you are working to resolve. With eKanban implementations, this can be any number of problems including excess materials on hand, slow inventory turns, too much scrap and more.

So, once you have universal buy-in on the project (see Guest Blog1: Real-world Advice for Getting Started on eKanban), the first step toward execution is to develop a good process, or value-stream map. For an eKanban project, this would involve documenting the flow of the current, manual Kanban process. (If you’re not using a manual Kanban system, map the current inventory replenishment process.) Next, document the process for the future state – using an eKanban system – and note the gaps. The goal is to identify the processes that do not provide value (e.g. waste) so they can be eliminated or improved upon.

Take the time to ensure you’ve mapped out everything. It may seem tedious, but it is worthwhile. For example, in one facility I worked with, it took us a day to develop a good process map. Over the course of the exercise, we found multiple variations in the current, 66-step process that produced excess waste. For example, they were literally logging 7 miles a year to track down inventory! Once we streamlined our map and implemented the eKanban system, the process was trimmed to just 6 steps. The exercise exceeded expectations, providing all team members with quantifiable value of the project.

Before I move on, I want to take a moment to tie the value-stream mapping exercise to the key take-aways from the first blog in the series: Communication and buy-in. Those involved in developing the process maps will likely buy into its outcomes, hopefully becoming vocal advocates of the eKanban project. As in the example above, the mapping exercise also provides useful data points for leaders and others to communicate across the organization.

Strategies for Getting Suppliers on Board

Some manufacturers experience supplier resistance to a new electronic Kanban solution. This push-back may stem from the perception that they are being forced to adopt new technology, pay the price, and/or hold the risk.

This criticism is based on the idea that when a supplier holds the inventory, they hold all the risk. One manufacturer I worked with had a unique solution to this dilemma. First, they started their eKanban implementation with a software pilot in a controlled area of their organization – and engaged just their top three suppliers. The manufacturer approached these three suppliers and entered into to a contract with them where they would assume half of the risk. Then they created a test environment where they could get the suppliers comfortable with the software. The suppliers received training on various scenarios, became familiar with email communications they would be receiving – and gained visibility into the supplier portal where they could monitor the manufacturer’s consumption and/or receive replenishment signals. 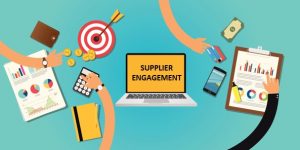 The manufacturer also gave their suppliers an incentive by including their eKanban software usage as part of their performance rating.

By taking more of a partnership approach with their suppliers, the suppliers became more engaged and, in fact, found their own benefits in using the system. One of the suppliers, while finding the software easy to understand, liked the ability to monitor demand through the eKanban supplier portal. Another supplier who was initially concerned about having excess inventory, found the eKanban system allowed them to better level-load. As a result, they reduced their over-time costs and were able to increase capacity without added expense. A win-win for all.

The Pilot Program and Beyond

As was demonstrated in the use case above, a pilot (or vendor free trial) is not only helpful for suppliers, but for internal adoption and continuous improvement. Starting an eKanban implementation on an isolated line or work cell allows you to work out any kinks or issues before rolling out the software to other areas. Internal chatter about the system starts to take hold and, based on my experience, employees start hoping their area is next in line. 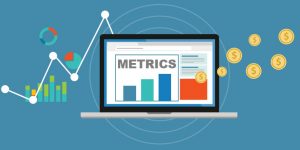 Beyond the pilot program, it’s time to start measuring progress toward what you set out to accomplish – and the metrics that will influence those outcomes. The manufacturer in my example established metrics for baseline inventory reductions and increased inventory turns and were able to recoup their initial software investment before implementation was complete.

When executing a transformative process, ensure no one loses sight of the mission. Continually reinforce the value of the outcomes and regularly communicate progress toward goal attainment. This not only helps to set expectations as you roll out the project, but creates anticipation for its results.

In summary, for a successful eKanban project rollout, here are the steps I recommend:

As you think about eKanban – or similar Lean projects in your organization – I hope you find this insight helpful. Next time, I’ll address post-implementation strategies of “listening to the process” and focused continuous improvement.

Jim Shore is the Principal of Quality Lean Solutions, a Consultant Firm that specializes in Medical Device companies, Supplier Quality and Lean Manufacturing principles.  Mr. Shore is co-author of “Proactive Supplier Management in the Medical Device Industry” (2016: Quality Press). Jim has 25 years of quality and supplier management experience in medical devices, semiconductor, aerospace and defense for firms and organizations including Titan Medical, Nypro Healthcare, Boston Scientific, Aspect Medical, Brooks Automation, Raytheon and ACMI Gyrus (now Olympus). He is Six Sigma Black Belt and Quality Manager/Operations Excellence-certified by the American Society for Quality (ASQ), as well as an ASQ-certified Quality Auditor and Mechanical Inspector. A veteran of Operation Desert Storm, he served in the U.S. Marine Corps for more than 15 years.